1st and 2nd have pretty clear leads, however 3 and 4 is a tight race. Personally I hope OpTic makes a great run this season.

Below are the results from this weekends HCS Online Cup. Apparently there were DDOS issues in the finals, but Denial could not play any further games. If I can get some more information on this, I’ll update this article.

Interestingly enough OpTic did not compete in this online cup. I believe they are scrimming for PGL Indy. More updates to come.

Below are the updated point standings for this Seasons HCS Ranking. No surprise as EG is still in the lead, with Denial and Winterfox trailing.

Below are the results from this past weekends HCS Online Cup #3. No surprise here as EG takes the tournament with Denial chomping at their heels.

Probably the most notable from this is LiquidHalo coming in 5th. Very promising for a fairly new formed team to finish that high. The next cup will take place this Saturday, the 30th. To sign up go to play.elsgaming.com

According eSportspedia, the updated standings are below. 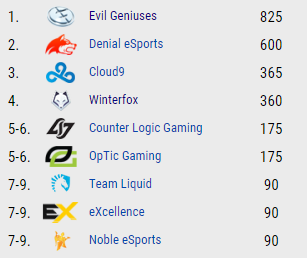 EG still has a commanding lead with Denial, C9, and Winterfox in close proximity.

END_OF_DOCUMENT_TOKEN_TO_BE_REPLACED

According to ESLHalo, Winterfox has won the first Online Cup.